[Тэкст даступны толькі на англійскай мове] On one side, a stage: a black scene surrounded by four neon lights. On the opposite side of the stage,a screen. In sight: the creative process. On the stage: the performer dressed in blue, and some props. In front of her, a video camera records her actions continuously. The image is directly broadcasted on the screen. The video artists interact with the background and the costume’s patterns. Using chroma-keying, the performer appears in different common locations: the street, the subway, a mall, … The costume becomes a media, a sort of mental space, a diary of the character’s emotions. 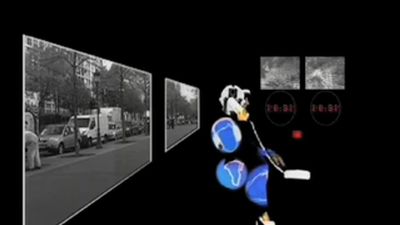